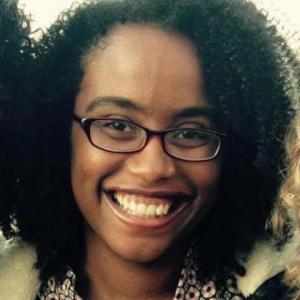 Kate Solomon-Tilley is an alumna of Ecole Bilingue (Class of 2001). She works as a Child Wrangler (or Child Guardian) for Disney’s Lion King on Broadway. A child wrangler is a stage manager for the child actors who work in the show playing Young Simba and Young Nala. Wranglers, like stage managers, help make sure the actors get to their cues on time, remember lines, and ensure their costumes and makeup are stage-ready. When not working at the Lion King, she works as a freelance stage manager, often on developing musicals on and off Broadway, and as a personal assistant to the legendary villain Jafar from Aladdin. She has been child wrangling for  “What the Constitution Means to Me,” an American play by Heidi Schreck that premiered on Broadway in 2019.

Meaghan McGrath is an alumna of Ecole Bilingue (Class of 2002). Meaghan studied Biology and Environmental Studies at the University of Colorado, Boulder. Following three years with Blue Earth Consultants in Oakland, she then completed her Master of Environmental Management at the Yale School of Forestry, while also pursuing an MBA from the Yale School of Management. She currently works for Plenty, an innovative vertical farming company based in South San Francisco that is focused on growing snackbly delicious produce near consumers. Throughout her education and career, Meaghan has pursued her passion to advance sustainable food production.

Clara Bartlett
Scientists work like detectives, sleuthing for connections between symptoms and their root cause. Clara Bartlett explains the importance of genetic analysis and disease modeling and how they are being used in the current pandemic.

Divya BenDavid
Graphic novels are under-rated and often considered less sophisticated and artful then their novel equivalents. Divya BenDavid explains why reading graphic novels may be a desired alternative to reading traditional books.

Jules Droz
New vaccine methods have made the rapid development of a COVID vaccine possible. This talk explains how the COVID vaccine was created and what it does.

Mary Maëlle Griffin
Music is a form of therapy for all of us, but particularly for those with depression and Alzheimer’s. Music stimulates body memory and parts of the brain that re-engage our senses and emotions.

Juniper Hedlund
Animals both wild and domestic are the invisible victims of wildfires. Wildfires that have ravaged our region have also impacted animals who may need our help.

Madeleine Kelly
Women’s voices are historically criticized as too high-pitched and “annoying,” especially the voices of women in leadership. Women lower their voices to be respected as authorities. Maddy Kelly proposes that we listen more for what women are saying and not just for the pitch of their voices.

Samantha Kirk
Do animals have moral reasoning? Dogs are empathetic,elephants are compassionate, and many species are altruistic. What might animal behaviors suggest about their capacity to know right from wrong?

Bodie Oakley
H.P. Lovecraft, an early 20th century writer, invented the pop culture genre of cosmic horror and the iconic Cthulhu mythos that are still inspiring artists. Although Lovecraft has been criticized for his racism, his concept of cosmic horror is as relevant as ever as we confront convergent social crises: climate change, a pandemic, and institutionalized racism.

A virtual conference hosted by
Ecole Bilingue de Berkeley. Zoom link will be shared with event RSVP.
Tuesday, December 1 and 8, 2020 from 7:00pm to 8:00pm

In the spirit of ideas worth spreading, TED has created a program called TEDx. TEDx is a program of local, self-organized events that bring people together to share a TED-like experience.

Our event is called TEDxYouth@EB, where x = independently organized TED event. TEDxYouth@EB will combine live speakers, TED talk videos and small-group activities and experiences to spark discussion, inspiration and connection among our students.

The TED Conference provides general guidance for the TEDx program, but individual TEDx events, including ours, are self-organized.